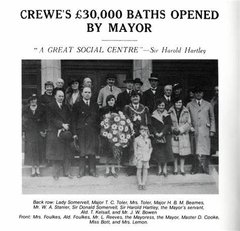 The official opening of Crewe’s new swimming baths on Flag Lane on 6 November 1937 was an occasion of great civic pride. In planning the building, the Council was visionary, demonstrating great innovation, enthusiasm and commitment to the local townspeople. They were highly commended as “living up to their motto of ‘Never Behind’ providing forward-thinking and revolutionary solutions to meet their community’s needs.

Such was the grandeur and excitement surrounding the opening of the building that Flag Lane was closed to traffic and policemen posted to control eager crowds. The following week the letters published in the local press record the disappointment and frustration of those who were not able to get close enough to watch the proceedings.

The building was also home to the Crewe Flyers, which was born out of the town’s first swimming club established in 1939. Flag Lane remained their home right up until the building’s closure in March 2016 before moving to the new Lifestyle Centre.

Many local residents earned their “water wings” at Flag Lane Baths with one of the most famous being Sale Sharks and England Rugby Union star, Mark Cueto MBE.

Right from the day it opened back in 1937 until now, residents have placed Flag Lane Baths firmly in their hearts, appreciating the legacy that many generations have experienced. Crewe residents alike want to see this legacy maintained.

NOW: THE MUCH LOVED ART DECO FLAG LANE BATHS REMAINS EMPTY AND IN A DEPRESSING STATE.

The building is in danger of increased vandalism, adding to the deprivation seen across many parts of Crewe, especially the Crewe West Ward in which The Lighthouse Centre and the Flag Lane Baths are located. The residents of Crewe are extremely saddened by the demise of this building; they strongly articulate their dismay and are asking for it to once again become a place of benefit to the community.